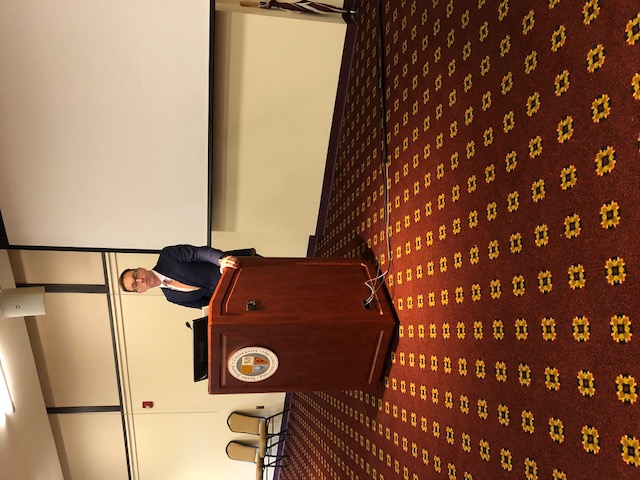 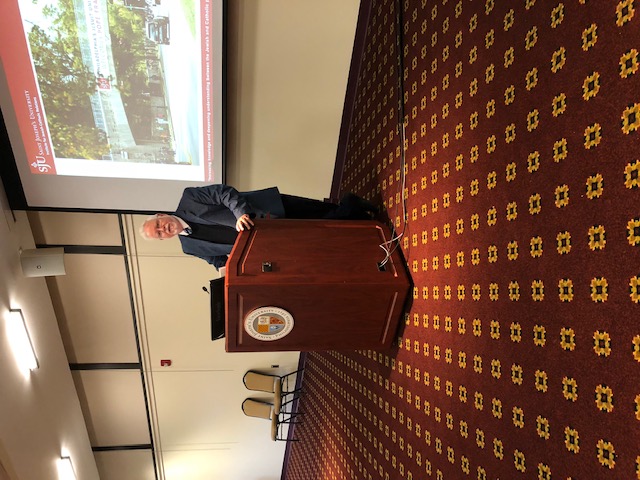 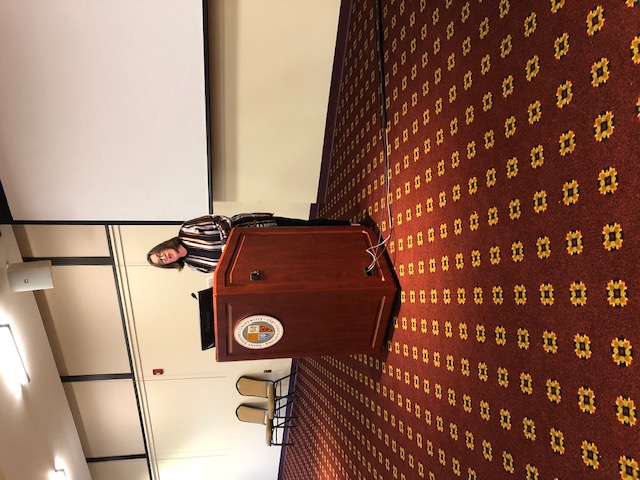 It is a true delight for me to be here at Saint Joseph’s University and to be able to offer a few reflections on the third anniversary of Pope Francis’ visit to this campus. That occasion was personally significant for me because I was honored to deliver the keynote address at the dedication of the wonderful sculpture, “Synagoga and Ecclesia in Our Time” and to greet my friend Francis at it two days later.

I also find it very meaningful that the theme for this commemoration is the university’s academic theme for this year, “Community Engagement.” Permit me to offer some observations about this. Some years ago while visiting Brazil, the Holy Father explained that whenever civil or religious leaders asked his advice, his reply “is always the same: dialogue, dialogue, dialogue.” To me, one way of understanding what it means to be an engaging community is to be absolutely committed to all forms of dialogue.

When on September 27th 2015, Pope Francis came to this university with the specific purpose of blessing the new statue the university had commissioned, I knew he did so because he places such a high value on dialogue among people, and, in this case, particularly on the dialogue of the Catholic Church with Jews. In the Vatican the previous June, I had presented to him a special folder that had been prepared by Dr. Cunningham and Dr. Gregerman containing all the details of the sculpture, at that time still being created. I told him that while he was in Philadelphia he would be staying near the SJU campus and ought to go to the university to bless the finished artwork. Without any hesitation he wrote a note in Spanish stating that this should be added to his schedule.

This anecdote and his instant decision says more than a thousand words about the commitment of the current Pope to the dialogue at large and to the Jewish-Catholic dialogue in particular. As Saint Joseph’s especially considers “Community Engagement” this year, I think that the example of engaging with the Jewish community, which this University has made a priority for over fifty years, can offer some helpful lessons.

In the 1950s and 1960s, for those Jews who in any way were harmed by the Shoah, the Holocaust, the establishment of a dialogue with Christians was an historical and spiritual imperative, but a very challenging one. European Christian religiously-based antisemitism had developed over centuries. It weakened Christianity’s social conscience. This weakness was exploited by the Nazis to poison the hearts and minds of millions of people.

Jump ahead to 2016 and the visit of Pope Francis to Poland. A short time before that journey, which would include visits to the concentration camp of Auschwitz and the death camp of Birkenau, I had a phone conversation with him. He said to me, “I wish you could be with me in Birkenau when I go there.” Of course, I agreed.

Francis said no words on that occasion, he spoke through his silence. When he left Birkenau several Polish journalists approached me and asked all kind of questions. One of them was: what is the importance of the dialogue between Catholics and Jews? I struggled for a short answer, one sentence that could summarize all my feelings about a topic to which I have devoted a great part of my life. I looked around that place where several of my ancestors remain among the ashes scattered there. Suddenly it came to my mind to point to the barracks — which are still in place on the field as testimony to the horrible acts committed there — and answered: look at those buildings; they would never have existed if genuine dialogue had developed before the outbreak of the calamity.

Authentic dialogue means much more than a superficial knowledge of the other. It demands a deep familiarity and an empathic attitude toward the other. Authentic dialogue is precisely the antithesis of the answer given by Cain to God’s question in the biblical book of Genesis: “Where is Abel your brother?” And Cain answered: “I do not know. Am I my brother’s keeper?” (Genesis 4: 9-10). Dialogue stands like a wall against violence, aggression, and murder.

But there is another dimension to the understanding of dialogue, with a much wider sense. In the common scriptures of our Jewish and Christian traditions, dialogue is seen as what defines the human condition. The only creatures with whom God comes into dialogue are Adam and Eve. The whole Bible is a book of dialogues. The Creator searches for each human being in order to enter into dialogue with him or her. So it was after Adam and Eve ate the fruit that God searched for them, asking “Where are you?” just as he asked Cain after the killing of his brother. The power of words is so great, that it is through them —according to the narrative in the first chapter of the book of Genesis, and other biblical passages like Psalms 33:9 — that God created the world: through words. The books of the Prophets are a testimony of their dialogues with God and the society in which they lived. In Isaiah 6, as in Jeremiah 1, their consecration as prophets is described as a dialogue they conducted with God. The book of Job describes in detail the dialogue that his friends had with him and, at the end of the book, that Job had with God. Of course, not all dialogues have such a conclusion. Many of them end with silence, or occur totally in silence.[1]

Something similar occurs in the four Gospel books in the Christian New Testament. Dialogue is a vital element in them. Jesus presents his thoughts to his Jewish brothers and sisters through words and concepts from their common language. Several Gospel scenes depict profound dialogues between Jesus and other characters, perhaps most notably in the Gospel of John.

Tragically, for many reasons that are more easily apparent in hindsight, the positive dialogue that should have existed over the centuries between Jews and Christians became twisted into disputations and distortions.

Today, after those many centuries, and after the Shoah, Jews and Christians are trying to recover a brotherly language, which perhaps might have been possible at the very beginning of Christianity. Prejudices must be uprooted and history demands that we begin a new chapter.

We are the heirs of a biblical culture in which dialogue was understood as the antidote for all kinds of violent impulses. We are the descendants of a tradition in which spirituality, the holiness that lays inside each individual, purity, mercy, and so many other excellent concepts were developed into cultural values and transmitted through words and actions from generation to generation. Nowadays, a great part of humanity is living in existential perplexity. The absence of dialogue in all senses and on all levels is a common failure throughout the world. The renewal of the Jewish-Catholic dialogue inspires the building of a new language of encounter based on sincerity, justice, affection and love, through which Jews and Christians, in accord with their own beliefs and practices, fulfill the duty of Tikkun Olam, the repair of the world.

The statue of “Synagoga and Ecclesia in Our Time” is a symbol of the dialogical encounter that developed in the last half century. It also represents a vision for the dialogue that is going to unfold in the future. Its image aspires to a new reality between Jews and Christians in which words transcend the barriers of the past and open the way for a constructive work together.

The site of the sculpture on the campus must be a place of reflection and not considered to be merely a shrine to a particular person or a particular moment. Its location in front of the Chapel of Saint Joseph is very significant. It offers a great message to the chapel and receives a message from the chapel. Their interaction invites reflection on the responsibility of each person entering the plaza to contribute to understanding and love among all people and communities.

The statue depicts a very dynamic dialogue between Synagogue and Church that can inspire each individual who passes by. Looking upon it one might ask: in what language are they talking to each other? Surely, it is not the chaotic speech of the Tower of Babel! Nor is it a language confined to mere words. Their interaction is accompanied by gestures and enhanced by the friendship between them.

The language of these two queens recalls the one prophesied by Zephaniah 3: 9, who said in the name of God:

“For then I will change the peoples, giving them a pure language, to call on the name of the Lord, all of them, and serve Him with one accord.”

It is the language of interpersonal engagement, of community engagement. That is what this statue is calling for.

The blessing called down upon it by Pope Francis is a perpetual prayer for the renewing of our language together, for the enhancement our dialogue, and for ongoing engagement with our brothers and sisters in the human family.